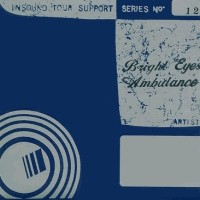 The Joy in Discovery

There's a cat in the window of the house of my lover
Well, she sleeps there alone now, or perhaps with another
Oh, I try not to think about that
I try not to think at all
I get cocaine from a girl I met and my brother buys me alcohol
And I stay up all night
Walking through these houses I have grown to hate
And my parents ask if I'm all right
I say, 'I've just been staying up too late'
I need to sleep
I need to do something to get this awful weight up off my chest
To keep her pretty ghost from chasing me
Her ghost from chasing me, from chasing me

The Woman in the Underpass

Lovers turn into monsters at the loss of all affection
Almost like it was the affection that kept them from being monsters
And I could have used some warning
I was on that porch all morning
Smoking cigarettes and sinking deeper into doubt
Could it be I am mistaken, have I stolen somebody's baby?
Is it possible for two people to need the same thing?
It's just the lines, they get so blurry
Between what is once, and now required
And I don't know on which side his heart falls
But I know where mine is buried
And it's so far from any wanting
Yeah, it needs this to keep beating
It won't go on without it
If I'm still weighed down with subt'leties
Then I'll just come right out and say
That I think that I deserve her
More than anyone deserves anything
Maybe I am selfish, but there is no way to share this
There's not enough to go around, I don't care who else gets hurt
But I'm still sick with empathy because I was stood in his place
I spent a year quietly dying while you let go and ignored her
And I'm sure that there are reasons for everything that happens
And absence leads to adoration, yeah it's nobody's fault
But now there is no way to change this
So I just photographed and framed it
And it's hanging in a hallway
That we have no right to walk back down
But I hope that he feels better but I'm sick of all the drama
I can't stand to see her crying, I just want this shit to end
And I want a place to hang out where a record player's playing
And there's a thousand movies rented for a thousand nights with her